A man lives like a hermit in a forest in Lozère and records the sound of the animals living around him. To capture these invisible presences, he has placed microphones in different positions around the forest. He listens from his cabin for the sounds they pick up, notes and classifies each presence, naming it and archiving it away. One night, he hears a cry he does not recognise. He goes looking for the creature that made the sound and meets Mana, a young girl who communicates with the birds. She joins his quest, which leads them to an abandoned mine, after a storm. 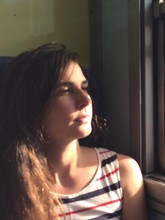 Judith Auffray was born in Paris in 1993. She studied painting and drawing at the École nationale supérieure des beaux-arts de Lyon then cinema at HEAD-Geneva. Her first feature film, A house (2020), shown in several festivals (such as Cinéma du réel, FID Marseille) and awarded at Ji.hlava IDFF and Bosifest, was released in cinemas in November 2021. She entered Le Fresnoy in 2020 where she made two films : 7:15-Blackbird (Cinéma du réel, Brive Film Festival, Côté Court) and Men of the night (San Sebastian IFF).