◄ Retour ◄ Back
◄ ►
Lissa, a conversation with God

Lissa, a conversation with God

“It is not the accounts of widespread and terrible violence that are problematic, but the ethical and religious visions that present it as desired and ordered by God” (Giuseppe Barbaglio). Why is there so much violence and inequality in holy books? If these are the product of a particular period and of inherent practices, is it not time to update our beliefs? Some would have us think that believers minimise the impact of all this violence on today’s society, but over the centuries religions shaped the society that we inherited and the ones we will pass on. To such an extent that the actual question of the existence of god is useless, even secondary. We can read in these books the roots of the evils that are eating away at our societies, in every area of life. From control of our bodies to the overt colonisation of foreign lands. In a nutshell, God is inaccessible, silent and immaterial. His intentions are always interpreted, divined and described by intermediaries. The aim behind this project is to manifest and bestow speech on a divinity using the IT principle of artificial intelligence. To offer it a personal and poetic materiality. A just god. Rid of the anger, the jealousy, the impulsiveness, the rancour and the thirst for blood and destruction described in the documents passed on to us by his “word.” If we clean all the injustice from our beliefs, from the writings and precepts that humans put forward to define the divine, what will the result be? 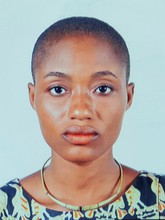 Born in Benin, where she lives and works, Moufouli Bello is an artist who questions social constructions. Although she has a legal training, her interrogation of social inequalities and questions of identity orient her more towards the study of ideological structures, that is to say, traditions, religions, cultures, socio-economic policies, geopolitics, and international power dynamics and relations and their impact on the processes whereby individuals are formed. Her research puts the emphasis on the notion of social justice in relation to the human condition, on race and the situation of women, and on identities, all of which evolve in keeping with society itself and its tribulations.