◄ Retour ◄ Back
◄ ►
What is a rat without a tail?

What is a rat without a tail?

Locked into a taxi heading to an unknown destination, a tree sways in a non-existent wind. Facing it, with us, an assembly plays on the symbols of accusation and fantasy in order to invite us to project a narrative. Wordlessly, the silence of the tree is the orchestra of our allegories. It is constructed by all the suppositions that we address to it. What is a rat without a tail? is a work in motion that gives the impression a primordial event has taken place, one that we need to find out about because it seems to be orchestrating the symbolic dialogues and purported clues. The back and forth between the trial and the taxi are transformed into refrains; the words become nonsense that stintingly isolate flashes of uncontrolled emotions. A disorder is woven and contained, enlaced in space. All the propagating external panic is our path. In What is a rat without a tail? these transitions from calm to movement, from silence to frenzy , from the microscopic to immensity or, again, from suspicion to rumour, invite the brief cessation of signifying – a cessation that is not brutal or definitive because it is precisely this suspension that is the becoming of our fictions that go from fragile to powerful, and in any case are decidedly human. 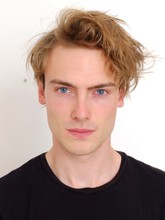 Dorian Jespers (Brussels, 1993) is a graduate of INSAS and KASK. The fusion of visual research and artistic freedom is a pillar of his singular, personal world. His film Sun Dog, winner of the grand prize in Rotterdam, has been invited to nearly a hundred festivals and shown at MoMA, Tate Modern and the European Film Awards.