Shot in the village of Realidade, on the BR-319, in Brazilian Amazonia, Curupira et la machine du destin is a story of love and revenge involving two figures from different historical periods who exist at the frontier of fiction and reality: Curupira and the ghost of Iracema. The film is an excerpt from the encounter in present time between Curupira, a queer devil who protects the Brazilian forest, and Iracema, a cabocla prostitute aged fourteen, a fictive character from the film Iracema: Uma Transa Amazônica, made by Jorge Bodanzky and Orlando Senna (1975). The ghost of Iracema falls in love with the image of Curupira and, at the intersection of the roads straight from Amazonia, throws herself into her quest to materialise a prophecy, like a kind of backwards Prometheus myth: burying fire by bringing it back to the earth; evoking Curupira and avenging the future. 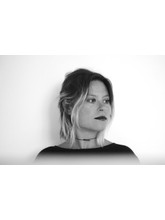 Janaina Wagner was born in São Paulo, Brazil. An artist, journalist and video teacher for children, she holds a master’s degree in artistic- political experimentation (SPEAP). Working with installation, video, photography, books, drawings, screenwriting and painting, she explores the points of friction between the human and its constructions. She looks at forms and subjects that refer to the relations of limit, control and contention that man establishes with the world, as well as with finitude in itself. Wagner has benefited from several artistic residencies, such as FID Campus - Festival International de Cinéma de Marseille (Marseille), Festival Mondes Possibles - Théâtre Nanterre-Amandiers (Paris), Bolsa Pampulha (MG, Brazil), Red Bull Station (SP), Casa Tomada (SP), Anarcademia, (W139, Amsterdam) and NES Skagaströnd, on the rural coast of Iceland.

Holder of diplomas fine arts and journalism and a master’s degree on the Artistic and Political Experimentation programme, and a video teacher, her references concern the procedures whereby humanity inscribes and articulates its progress and its heritage. Janaina Lives and works between Roubaix and São Paulo.