A black panther watches over sleepers; a community living on a wasteland near the railway tracks, among them the magic child Nour. Two men follow him through the post-industrial landscape around Lille. The poachers immediately fall into a mortal sleep, in circumstances that are mysterious. A kind of panther. Nour is ready to travel. To write a song for the sleepers of the world. As much a lamentation as a hymn, digging into the wall-less night this dream drawn in the dust. 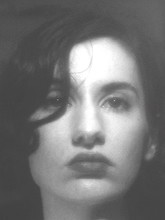 Vera Hector makes films that combine narrative and experimental cinema, influenced mainly by montage cinema and electronic music. Since deep feelings do not make clear distinctions between sublime and trivial supports, she creates a form of writing out of mixed genres and media. She films in order to recapture the babbling of language in order to be, as Elysia Crampton puts it, “always the child of something.”